You are here:
Women in Business 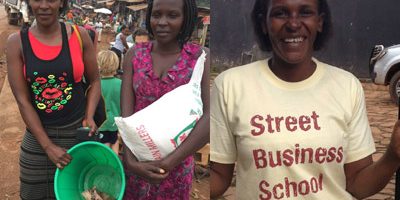 Meet Nabulime Sylvia. She is a 29 year old mother of 4, and also supports her sister and nephew.

Before Sylvia met SBS (Street Business School) her life was very difficult. Shortly after marrying her husband and having her first child, her husband started drinking heavily and beating Sylvia. But with nowhere to go, Sylvia was forced to endure and the couple eventually had 3 more children. They lived in a one room house that was 6 x 6 feet with mud walls and no electricity or running water. It was located in a swampy area and during the rainy season would flood.

Sylvia’s husband would often stay away for days at a time, and when he was around left less than 50 cents a week for the family’s upkeep. Finally feeling desperate, Sylvia borrowed money from a friend and started to sell roasted maize on the street. From this she began earning about $15 a month to support the family. Even then she struggled to pay rent and her children were often expelled from the public schools because they hadn’t paid the tiny amount of fees required. Remembering this time and how she used to beg her neighbors for food, she says “I had no dignity.”

Finally the day came when Sylvia realized her husband was never going to support her. A friend told her about the Street Business School training but Sylvia arrived when the training had already started and was told that it was too late to join. But Sylvia was determined and asked our team repeatedly to join until they relented.

Sylvia told me that the thing she learned was to say yes to every opportunity. Shortly after starting SBS, she decided to open a new business. She had heard of other people selling raw meat to customers to prepare at home, and heard of a woman in another neighborhood to sold it in small quantities. She woke up very early the next day and took a b us to the city slaughterhouse. There she purchased meat for 15,000 ($5) and cut it up to put into small bags of 5 – 6 ounces each. Back in her neighborhood, she walked door to door asking people if they wanted to purchase the small bags. By 9am Sylvia was sold out, and had made 30,000 ($10) in profit. This was as much in a day as she could earn in 2-3 weeks of selling maize. On that day a business woman was born.

Now Sylvia can hardly sleep because of all the opportunities. She has expanded her meat hawking business, purchasing more meat each day, offering vegetables that people like to prepare with meat, and offering specialty meats as well. She has also become someone customers rely on and sometimes receives special orders where she can clear $40 – $75 in a single day.

During the 6 months of SBS, Coach Rachael visited Sylvia and asked her what she did after 11 am when she finished selling meat. After thinking about it for a few days, Sylvia started selling diapers in the community. A whole package of diapers is too expensive for many families, but mom’s can often find 20 cents to purchase one diaper, a need that Sylvia willingly met.

When I met her in December Sylvia sat down and announced that she had started a new business the day before. She had sent her sister to the largest hospital in Kampala and sold diapers there in the maternity ward! A new branch of her business was open.

Sylvia now estimates that she is making at least 600,000 a month ($200) and more during certain times of year. I last saw Sylvia on December 23rd, and she informed us that the 24th would be her biggest day of the whole year because people were purchasing meat for their Christmas celebrations. She estimated that she would earn a profit the next day of 500,000 alone – almost equivalent to an entire month’s earnings.

With improved sales and profits, Sylvia moved to better house with brick walls, an iron sheet roof and electricity. Her three older children are back in school and now attend regularly.

At her graduation from the Street Business School, I looked at Sylvia beaming with joy and pride for the courage, accomplishment, and the remarkable journey that she is on. When asked what advice she would give to others, she surprised me by laughing and saying that she is already giving actual advice. Many people in her neighborhood marvel at her transformation and have come to ask how she did it. She says she has shared her learnings with at least 10 other woman.

Asked what she will do next she tells me the sky’s the limit. Says Sylvia, “I have so many ideas I can hardly sleep. I’m so excited and my brain is just boiling with ideas.”