You are here:
FilmWomen Documentarians 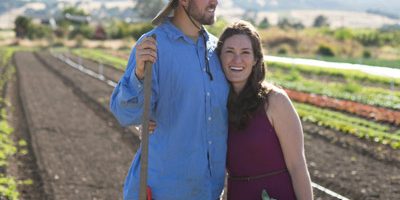 Casey has been bringing untold stories to a global audience through documentary film for nearly a decade. Her personal storytelling style and keen interest in illuminating the lives of ordinary people have taken her to developing countries on four continents. Now, these skills have enabled her to tell her and her husbands’ own story in a new documentary, The Organic Life, which elucidates how they have learned to connect locally around food, community, and love.

Q: How do you describe your role in the good food economy?
As a storyteller who’s married to a small-scale organic vegetable farmer, I see myself as uniquely positioned to tell stories about food and farming. In some ways, I’m an advocate for the work farmers like my husband are doing; in other ways, I’m a happy participant. Mostly, I would say I’m an observer who captures my observations on video.

Q: What unique knowledge, insight or expertise do you bring to this work?
When my husband, Austin, and I first became involved in this work (him as a farmer, me as a filmmaker), I saw a general reluctance in most farmers to talk about their work – why it was important and why we should value it. Though of course this isn’t true across the board, I think those people who are drawn to farming are not usually extroverts. Austin would much rather be working with his plants, or canning tomatoes, or scheming up a new greenhouse system than be interviewed about his farming practices!

At the same time, I saw a discrepancy in what the media was portraying about small scale and particularly young farmers and what Austin and I were experiencing. Generally speaking, the media is really attracted to extremes – either extremely impassioned farmers who would do anything (and make no money) for a bite of the first tomato of the year or farmers on the verge of collapse. Of course, reality is somewhere in between. Most farmers, especially those who have chosen this life and profession, love what they do; however, simultaneously, most are experiencing some kind of financial difficulty and emotional or physical strain. Life is complex. There is no one right answer. I wanted to show that.

Q: How did you come by your expertise?
I was fortunate to realize early on in life the pull that the medium of documentary film held for me. While I was able to take several filmmaking classes in college, given the absence of a filmmaking major, I resorted to self-directed study and practice to further my development. With encouragement and support from several advisors, I began making short documentaries, honing my skills. From there, I worked on several feature documentaries. The Organic Life is my feature length debut as producer/director.

Anything that I know about food and farming, I’ve learned by osmosis from being with Austin and hanging out with our farmer friends. I still have to make it very clear that out of the two of us, Austin is the farmer. People assume because I made a documentary about farming, I know how to deal with rust on their garlic or their withering basil plant. Unfortunately, that’s usually not the case. Luckily, I know a really good farmer who I can refer people to!

Q: What are the values and principles that guide you in your work?
I wanted to make a film that was inclusive and that would inspire all sorts of people to check out and get involved with their own local food scenes. In my own life, friends and family would at first get worried when they had to cook for Austin and me or choose a place to eat. They worried that we would judge them for not eating organically (for most, eating seasonally was not yet on their radar). Obviously that wasn’t the case, but somehow our life choices made them defensive. That shouldn’t be the case.

This is a movement that should inspire all people to participate on any level. Our belief is that once people taste how good food can be, they will seek out seasonal, local producers and sellers.

It is never too late and it is never a bad thing to befriend your local farmers. I think on an individual scale, farmers are usually open to and accepting of all of their customers. I wanted the media that surrounded the topic to begin to reflect an openness that is already there. To that end, Austin makes a great point in the film that it’s not just wealthy people who enjoy eating good food, and one of our greatest motivations is to continue to further the local food system toward one that invites everyone to the table. A truly robust, sustainable local food system would serve the needs of all people and not just a privileged few.

Q: Who are the allies, peers and/or competitors in the good food world that inspire you?
There are so many food and farm films and filmmakers that have come before me that made The Organic Life possible. Without films like Food Inc., The Future of Food, and Forks Over Knives, I truly don’t think there would be an audience for the film I made. For that, I am very grateful of those directors and producers’ longstanding and ongoing effort to spread the word about the importance of eating local, organic food.

I have been fortunate to connect with the organizers of several organizations doing incredible work in this field. I love the work that LocalHarvest does to connect people across the country to local farms. The Organic Consumers Association does great work to inform consumers. And we have personally been so lucky to be part of a burgeoning Farmers Guild Movement in Northern California.

Learn more about Casey and Austin at www.theorganiclifemovie.com

The film is now available for download at iTunes (click here) or you can purchase DVDs at https://www.createspace.com/394630