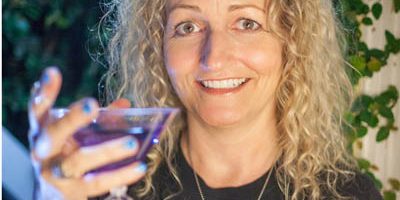 Join Amy Pickard to discover the most important lessons she has learned from the recent deaths of her beloved parents and the strangely beautiful way that grief has transformed her own life.

After changing careers in mid-life and discovering her cosmic calling, Amy offers a new, enlightening and affirming way to look at death that will change your perspective, ease your fears and encourage you to embrace your own life with newfound clarity.

Amy Pickard , age 48, lives in Los Angeles, where she is powered by the sun and rock and roll. She grew up in Dayton, Ohio, and at the age of 16, she might have been the youngest VJ to ever introduce a video, which she did while working on a local cable access music video show. As the Martha Quinn of Dayton, she was able to interview and hang out with all of her favorite bands.

Propelled by her Anglophilic obsession, Amy followed in Chrissie Hynde’s footsteps and moved to London where she worked as a DJ at a 50’s theme restaurant. She also had frequent engagements as a music and pop culture contributor for the BBC. Amy lived in London off and on for several years, interspersed with stints in New York City and Chicago. In 2000, she settled in Los Angeles, where she has worked for VH1, BBC Radio 2 and countless other outlets. As a freelance video producer, she has interviewed Academy Award winners and covered numerous red carpet events and press junkets.

In 2012, Amy’s mom died suddenly and unexpectedly. While grieving her mother’s death and sorting through her mother’s paperwork in an effort to wrap up her financial affairs, Amy went through what she describes as a “tectonic, spiritual transformation.” She discovered her cosmic calling: to create an unconventional advance planning company that would help everyone put their affairs in order and document their end-of-life wishes. Thus Amy’s business, Good To Go!, was born.